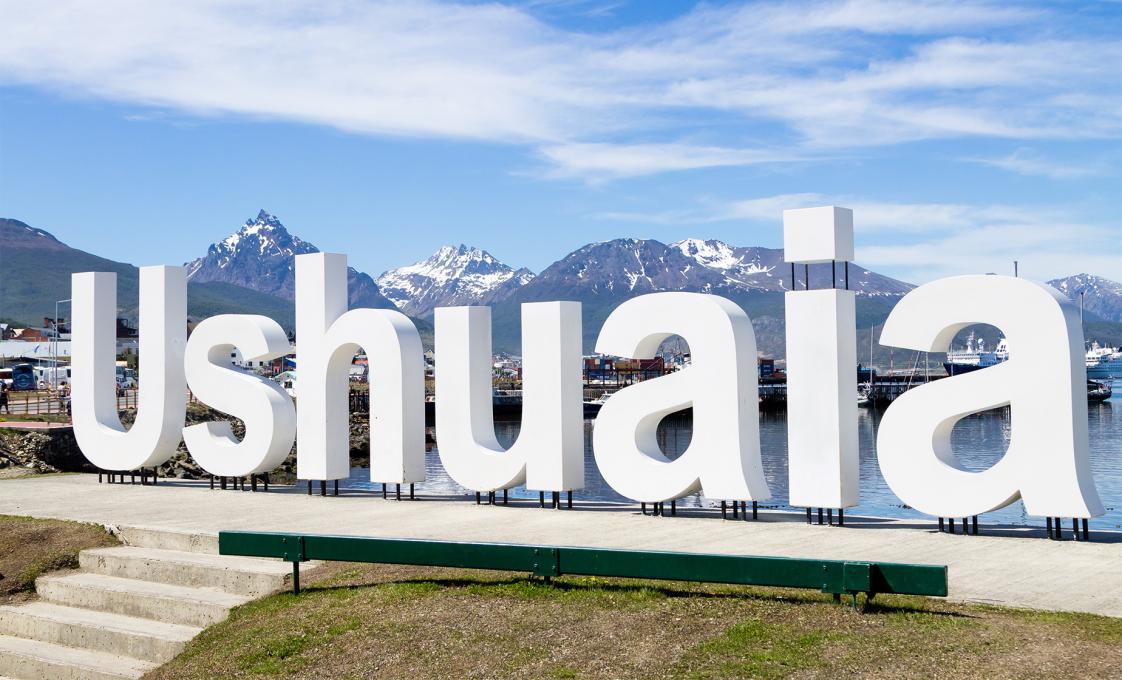 See many historical buildings as well as beautiful views of Ushuaia Bay on this tour of the southernmost city in the world on board a double-decker bus.

Welcome to the southernmost city in the world, Ushuaia, a one-time penal colony located quite literally at the end of the earth.

Ushuaia is the city closest to Antarctica and is bordered by the last peaks of the Andes mountains and the famed Beagle Channel (named for Charles Darwin's ship, HMS Beagle), the city is surrounded by lakes and bays, forests and glaciers.

Ushuaia is the capital of the Tierra del Fuego, Antarctica, and the Southern Atlantic Islands' Province of Argentina, a mouthful usually condensed into three little words: "Fin del Mundo." Those words, End of the Earth, can easily conjure images of a bleak and barren landscape, but nothing could be further from the truth. Ushuaia is a land of vivid colors and vibrant personality.

Seeing Ushuaia on board a double-decker bus, you will observe many historical buildings, and the first houses that show the typical Fuegian architecture in wood and tin.

The excursion will go into the naval base, where you can see the city's first building (built by prisoners between 1902 and 1911), as well as a replica of the End of the World Lighthouse.

Travel along Governador Paz Street up to Centenary Park and enjoy the view of the mountains that surround the town. The tour continues around the bay towards the place where the old Anglican mission settled down, as you learn all about the first inhabitants of Ushuaia. Other historical highlights include the Beban House.

Before heading back, the tour will stop on the other side of the bay at the best panoramic point facing Ushuaia Bay, with the highest peaks framing the town.

Return along Avenida Maipu and enjoy beautiful views of the port and the first buildings of the city, like the Salesian Church, the first Government House, the first police station, among others. At the end of the tour, you may stay at the Maritime Museum or continue to the starting point of the excursion. Your tour ticket entitles you to a discount at the Maritime Museum, at the End of the World Museum, and at the Aeroclub where you can book fly-overs.

See our FAQ for more information

We are experts in providing exceptional shore excursions. We understand that in today's fast paced world, vacations have become an increasingly important way to relax, reconnect with family and friends, and experience new and interesting places. With this in mind, we provide the highest quality tours by performing extensive research, and detailed reviews. While other companies also offer excursions, we strongly believe our expertise and approach set us apart. The large cruise lines sell shore excursions - typically in very large groups visiting high traffic sites. We focus on smaller groups visiting more interesting and authentic locations using more personalized local operators. While the cruise lines are experts in delivering cruises, we are experts in delivering shore excursions.

Our Approach
We believe quality service is not only highly valued by customers, but ultimately leads to better experiences and higher satisfaction. Unlike the cruise lines and other tour companies that rely almost entirely on websites, we encourage customers to call us. We want to invest our time answering your questions, providing input, and selecting the excursions that best meet your needs.

Our Tours
Our goal is to provide customers a wide array of exciting, appealing, and enriching tours. For those customers who prefer to travel in smaller groups with more personalized service, we offer a wide variety of small group tours around the world. These tours generally range in size from 2-12 people compared to larger tours which can number up to 50 people. While exploring the destinations and ports on this website, feel free to search for these "Small Group Tours". For those customers interested in private tours, we offer many outstanding excursions that allow you to travel with your party alone and, in many cases, to fully customize your tour. Search for "Private Tours" if you are interested in this experience. Our "Scenic" tours provide up close and personal access to some of the most spectacular natural environments on Earth from majestic glaciers in Alaska to spectacular reefs in the Caribbean. Our "Cultural" tours allow customers to experience local customs, entertainment and culinary delights ranging from tribal dances in Alaska to an outstanding local meal in Santorini, Greece. Our "Active" tours offer a multitude of exciting and adventurous ways to experience our destinations. Our customers can kayak the turquoise waters of the Caribbean, hike to a spectacular waterfall in Hawaii, or bicycle through quaint villages in France. Our "City" tours allow travelers to see the highlights of great cities around the world with unique insights provided by our expert tour guides.

Our People
In our experience, exceptional travel experiences are almost always delivered by exceptional people. With that in mind, we utilize a comprehensive approach to select and employ the leading tour guides and tour providers around the globe. We hold our people to very high standards which we measure by our comprehensive Quality Control process and, most importantly, by our customer feedback, which we will actively seek from each of our customers.

Our Owners
Shore Excursions Group is owned by seasoned travel executives possessing extensive experience across many sectors within the travel industry.

Michael Bonner
Mr. Bonner has over a decade of experience working in the cruise industry in a variety of roles for both Royal Caribbean Cruises Ltd. and Viking River Cruises. Most recently, Mr. Bonner was the Chief Operating Officer for The Scholar Ship, a Royal Caribbean program aimed at providing college students onboard educational programs in conjunction with enriching shore excursions around the world. Mr. Bonner also helped co-manage Viking River Cruises U.S. Operations, and he ran the corporate, strategic, and deployment planning functions at Royal Caribbean. While at Royal Caribbean, Mr. Bonner was responsible for forming Royal Celebrity Tours, Royal Caribbean's land-based tour operation in Alaska, which takes cruise passengers on multiple day tours through the interior of Alaska either before or after their cruises. Prior to working at Royal Caribbean, Mr. Bonner was a consultant for Booz Allen & Hamilton.
Less
from $19.00 (USD)
Per Person
Contact Us
Tour Type
Group
Group Size
Standard
Activity Type(s)
Cultural, Scenic
Tour Duration
1 Hour
Activity Level
Easy
Tour Leaves From
A 5 minute walk from the pier entrance (details will be provided when this excursion is booked).
Food/Beverage Provided
None
Special Instructions
For all tours in Ushuaia, we recommend dressing in layers with the outer layer being waterproof. Windbreakers and sensible rubber soled walking shoes are also recommended. Sun glasses, hats and gloves are suggested.
Restrictions
Guests must be able to climb a steep staircase to access the top deck of the bus. Guests with a fold up wheelchair can be accommodated on the lower level only but must be able to step on / off bus.
Terms & Disclaimers